“To be a true hero, you must be a true Christian.”  G.A Henty

I have a wonderful resource to share with you!  Heirloom Audio Productions, Audio Drama of In Freedom’s Cause Single Package by G.A Henty!  I love radio dramas.  It is honestly nice to just sit back and enjoy something that doesn’t require a screen!  I think I learned to enjoy these growing up because we didn’t have much television.  We only got one channel so I had to find other areas for entertainment.  My mom had a radio and record player though so I would listen to radio dramatizations all the time.  This has carried over and I have tried to share them with my children.

If you’ve been following me for a little while or have seen pictures from our most recent move, you know my true passion is with books!  A few years ago, I was drooling over the set of books by G.A. Henty.  As I was researching some information, I happened to come across a 50% sale on the G.A. Henty book set that I had been drooling over.  I couldn’t believe my eyes!  Was this really happening?!  My husband blessed me during tax season with the entire set!  When I was asked to review an audio productions by Heirloom Audio of In Freedom’s Cause Single Package, I was thrilled!  Let’s face it, finding good, clean, educational and fun entertainment for our kids is not an easy task!

Who was G.A Henty?

George Alfred (G.A.) Henty was a writer who not only wrote about history, he actually lived it!  He was a wrestler, boxer and traveled all over the world as a war correspondent.  Henty loved his family and loved sharing stories with them.  In fact, the main characters in his first book Out on the Pompas were named after his children.  Henty wrote 122 books, which if you start reading from the beginning of the series all the way through, you will have covered much of history!  His books are fantastic and make excellent read alouds!

What is In Freedom’s Cause Single Package by Heirloom Productions about?

“He hath led me on the paths of justice, for his own name’s sake.  For though I should walk in the midst of the shadow of death, I will fear no evils for thou art with me.” -From Wallace’s Psalter,  Psalm 23 Latin Vulgate.

The story takes place in the 14th century in Scotland.  When the people of Scotland rose up against their English ruler, “Give me liberty or death” were their only choices.  There are some that would say that this was not even a choice as many of the people in Scotland during this time were supporters of the English.   The story, as told by Henty in his book and as portrayed in the Audio CD by Heirloom Productions, shows a very accurate portrayal of the events that occurred at Bannockburn in 1314. 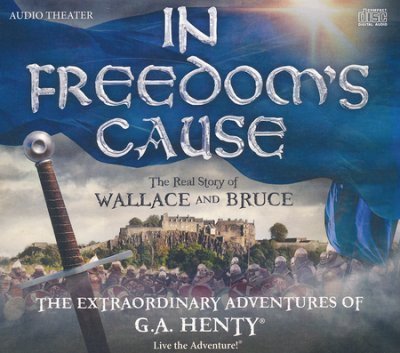 In Freedom’s Cause the Extraordinary Adventures of G.A. Henty

How we used this?

This review could not have came at a better time.  We had just bought a house and were traveling between our house in Tennessee and my parent’s house in West Virginia while we had some minor maintenance completed.  I’m sure you know that when traveling with children, you have to prepare.  After traveling from Ohio to Texas to Maryland to Washington and back to West Virginia, road trips are long and boring and I have had to get creative with my kids’ entertainment options.  The arrival of this review with our current road trips became the perfect opportunity to bring along In Freedom’s Cause!  The kids got a Bible character lesson on honor, they learned history, they were exposed to a different learning medium than usual, and we got some wonderful family and learning time.  It also wasn’t wasted time with the kids focused on themselves in their own little world during road trips.  We took the time God gave us in the car and used it for HIM.

I  loved stepping inside the pages of G.A. Henty’s book In Freedom’s Cause as presented on CD by Heirloom Productions.  It was wonderful to hear this story come to life in the audio version.  I was blessed to step back in time and listen to the stories of manly men that are true of character.  I loved hearing the Bible character lessons that we find so important come to life right there in the car for my kids.  They have now listened to this CD 5 times!  That shows how much they have enjoyed it.  Just the other day, they asked to listen to it even when we are not traveling. 🙂  The availability of an audio version of G.A. Henty’s books is very important to us.  We want our boys to grow up to be men of honor and strong character.  We want our boys to not just know the scriptures but to live them.  I cannot wait for more of Henty’s books on CD!  This CD was such a success and I am honored and blessed to have reviewed it.

The study guide was also an excellent resource and other downloads that the review crew were given were absolutely incredible! What a blessing it was along with the CD. I can tell you that I am not sure who enjoyed it more, me or the kids. It is packed full of information from vocabulary, quotes, to lessons that really help you learn more about In Freedom’s Cause. Some of the other downloads and extras we received were interviews with the cast, the soundtrack, Wallace Prayer, the background and introduction to each of the cast and characters. I would definitely recommend this resource to anyone regardless of homeschool, public, or private.

If you’re a parent of boys especially, you need this resource! ***Prater 5 Media, LLC may have been compensated by either finances or product in exchange for this review. All opinions are my own thought. *** One question I see being asked a lot is whether or not to use box curriculum for High School as part of homeschooling. This question becomes a bit more urgent…

Using Your Journal for Daily Prayer and Growth If you’re already keeping a journal, you might be thinking about some ways that you can use this journal to enhance your spiritual growth. You may already know someone who uses their journal for daily prayer logs and you might even be doing that already. But if…

Refreshing, colorful, and nutrient-rich fruit salad, without a doubt, symbolizes a spoonful of awesomeness. The deliciously healthy combination of fruits can definitely beat the heat. Fruits come loaded with plenty of water and fiber, and that is what makes them surprisingly filling. Kids, especially, love this colorful combination of fruits because of its succulent taste…. It has been a while since I shared my first post about hospitality. One thing I didn’t discuss on this topic is creating a house that is inviting. But just because you enjoy having people over doesn’t mean that people will naturally just show up. You have to first create a home that people will want to…