Some of my favorite stories as a child came from the Old Testament. I could listen to the stories of creation, Joseph and his coat of many colors, the Passover, the plagues of Egypt and the Exodus, David and Goliath, and Samson over and again. I didn’t always understand them, but I was amazed by God’s creativity and provision for the people He loved. As a teen, I came to understand much more about these stories as I grew in my relationship with Christ. Each time I heard it, I was fascinated by the Passover. I kept finding more details that told me more about God’s love and compassion. I craved to understand more.

When I began homeschooling my oldest son, we decided to learn more about some of the Biblical Feasts with unit studies. Guess which one was our favorite every year? (Ten points if you guessed Passover!) My son is now a theology major and loves to dig into the Jewish traditions described in scripture.

The Biblical feast of Passover is a celebration of God’s protection and provision for the nation of Israel over 3,000 years ago. At that time, the Israelites had been in slavery in Egypt for 400 years. Although they knew of God, they lived under the control of a pagan nation, surrounded by people who honored man-made “gods.”

These people controlled every area of their lives, including whether they lived or died.

In the first few chapters of Exodus, we meet a man named Moses. Moses had a very unique upbringing as the grandson of Pharaoh, even though he was the son of an Israelite slave woman. As an adult, he came to understand his true heritage and struggled with it. This resulted in his fleeing to the desert of Midian and marrying into the family of Jethro, a priest of the God of Jacob. 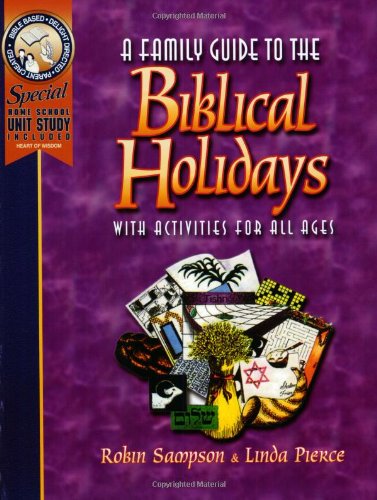 A Family Guide to the Biblical Holidays: With Activities for All Ages

During this time in his life, Moses came to know God on an intimate level. He went through many trials that brought him to an understanding of God’s faithfulness, power, and provision.

In Exodus 12-15, we read about the first Passover. Can you imagine what it must have been like to be an Israelite in Egypt? For hundreds of years, God’s people had been slaves. They knew He was their God, but they saw very little evidence of His plan.

All of a sudden, things started changing quickly. Moses returned to confront Pharaoh, the strength and beliefs of Egypt were attacked during the Ten Plagues, and God commanded His people through Moses to prepare to leave. Something was going to happen, something which none of them would ever forget. The instructions the Israelites were given for the Passover in Exodus 12 can seem a bit strange to us today, but each step was something that would have been very meaningful to them. There’s something else that I find awe-inspiring, though: each step was designed to point God’s people toward Christ, even thousands of years before His birth.

Passover is one of the most important feasts of the Jewish year.

It’s a celebration of God’s faithfulness to the nation of Israel in releasing them from slavery. However, it is also a celebration that was designed to make the hearts of God’s people ready for the salvation that Christ would bring!

Just as the blood of the lamb on the doorposts of each Israelite home provided protection from death, the blood of Christ, the Lamb of God, paid the price that we could not. It paid for our sin, our rebellion toward God, and gave us salvation. Just as the Israelites left their lives of slavery to journey toward the land God would provide, God gave us a way to leave our slavery to sin and live a life dependent upon Him – upon His strength, love, and provision.

Even the parts of the Passover dinner have deep meaning!

Parts of the Passover Dinner

The Passover dinner, called the Seder, is an important part of the Passover celebration. God instructed that each part of the meal be prepared and eaten to remind us of His faithfulness. 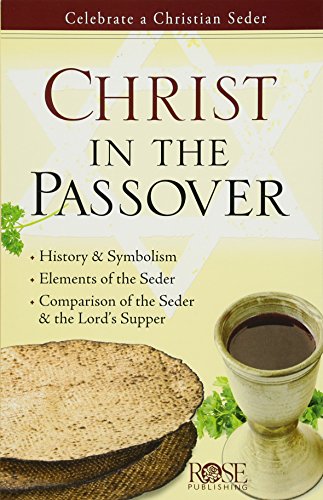 Christ in the Passover pamphlet: Celebrate a Christian Seder

As part of this study, you can make your own Seder meal! The instructions are below. This was one of our favorite parts of learning about Passover!

The main parts of the Seder include the following:

Christian Celebration of The  Passover Feast In a skillet, sear and cook the lamb chop until done and set on the plate. To make the Haroset, mix the apples, honey, walnuts, and cinnamon together. Set a small pile on the plate.

Put a small helping of horseradish on the plate.

Set the sprigs of parsley on the plate. Put some water in a small dish and mix in some salt. Set the dish near the plate and use this to dip the parsley in it before eating it.

Set the egg on the plate in the shell. I broke my matzah up into four pieces and set those on the plate in a little stack.

Pour the grape juice into a glass and set it near the plate.

Enjoy your Passover meal with your family in the way you would like to celebrate!

There are so many amazing things to learn about Passover! You can study it deeper using this unit study. I hope you enjoy it as much as we did! I’d love to hear how your Passover celebration goes. Just comment below! And don’t forget to get the unit studies for the Ten Plagues of Egypt and the Biblical Feast of Hanukkah!

Don’t forget to print out your recipe for later!

1) Place all the pork in a large round freezer safe container that fits inside the Instant Pot. This will ensure you can cook the pork bites from frozen with minimal defrosting.

2) Pour the remaining ingredients except for the onions inside the container with the cubed pork. Mix it up well so that everything is covered then place the onions on top.

3) Place the lid on the container and then tape the cooking instructions to the lid. Place in the freezer for up to 1 month.

1) Defrost the pork bites just enough to be able to remove them from the container. A few minutes under cool water should be enough.

2) Place the pork bite in the Instant Pot, no trivet or extra cooking liquid is needed. It will produce enough liquid on its own. Close the lid and turn the pressure valve to sealing.

4) At this point you can either serve the pork bites as is, they should have an internal temperature of 170 degrees F, or you can place them in a baking pan with all the juice and broil them for about 3-5 minutes to make the outside a little crispy. A prayer box can be a wonderful addition to your home, meet-up or classroom. It’s a lovely way to introduce others to the power of prayer in a thoughtful and encouraging way. Prayer boxes can open the door for others to ask for prayer without having to step outside their comfort zone; these boxes offer… Observing Lent as a Methodist is important and holds great significance. The word “Lent” is a common term heard across many types of people and faiths. However, for some in the Christian faith, it’s not just a word but an important holiday that’s observed and respected. If you’re not familiar with Lent, or you just… If you’re one of the many planning a Walt Disney World vacation in October, there are some great things up ahead for you. In order to help you plan your trip and get the most out of your stay, I have some very important tips to offer. From where to stay to when to visit…